AdvaitaBio’s IPathwayGuide plays significant role in the research of a Stanford investigator. 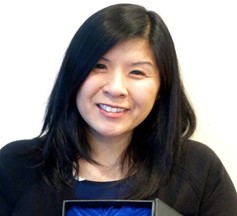 Stanford University is one of the world’s leading research and teaching institutions. With a 1.69 billion dollar annual sponsored research budget, Stanford has been delivering breakthrough discoveries in numerous domains. For over 6 years, Dr. Linda Yip has been conducting research at Stanford, focusing on the identification and characterization of genes involved in the pathogenesis of Type 1 diabetes. Among other distinctions, she was selected as the 2016 recipient of its Young Investigator Award by the Network of Pancreatic Organ Donors with Diabetes. She is also a co-chair of the Omics Working Group.

Dr Yip’s research is extremely important as more that 34.2 million people of all ages or 10.5% of the USA population have been diagnosed with diabetes, which is currently a major health care concern. Dr. Yip’s recently published research show novel disease mechanisms proven through an in vivo neonatal mouse model that was chosen to mimic the diabetes in children. Specifically, Dr. Yip and her team hypothesized that sugar and iron metabolism crosstalk. For this purpose, she used iPathwayGuide from Advaita Bioinformatics platform to investigate and explain the association between high iron exposure and the increased risk of type 1 juvenile diabetes. 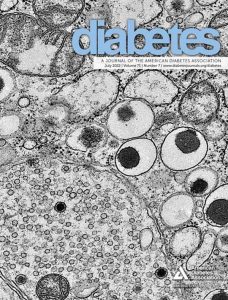 Particularly, the data gathered by Dr. Yip revealed that activation of the

signaling pathway” is critical in diabetes, and its main regulator GLUT2 biomarker may control the newly discovered cross-talking-mechanism with the Iron metabolic pathways.

A recent publication in the Diabetes journal describes these very interesting findings from Dr. Yip and her team. Using AdvaitaBio’s iPathwayGuide as a data analysis tool, they identified novel pathways that mirror human diabetes pathology in connection with iron over-exposure. Dr. Yip’s team identified a plausible mechanism that explains the association between high iron exposure and the increased risk of Type 1 diabetes.

Dr. Yip utilized the iPathwayGuide software which performs a perturbation analysis that can pinpoint the underlying mechanisms of the phenotype. Perturbation analysis is unique to iPathwayGuide as it takes into consideration the position and type of all genes, as well as the direction and types of all gene signals on every pathway. The image below highlights Dr. Yip’s findings on one of the most relevant pathways for diabetes. 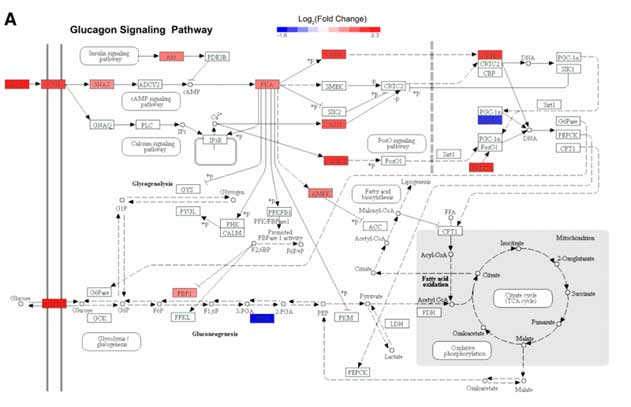 signaling are affected during the earliest stage of disease.

In addition to pathway analysis, Dr. Yip extensively used iPathwayGuide’s capabilities to understand the effect of the up- and down-regulated genes in pancreatic islets, as seen in Figure 2, below.

Figure 2. Downregulation of extracellular matrix (ECM) genes in the pancreatic islets of 10-day-old NOD vs. NOD.B10 mouse model, as shown by iPathwaysGuide’s analysis, which proved to be a reliable tool for “in vivo” research models. B and C: Volcano plots showing entities that represent the 124 genes expressed in islets belonging to GO term 5201: ECM structural constituent. A significant association with this GO term was observed at 10 days of age when 34 out of the 124 genes were changed by twofold or more (pink) or threefold or more (red) in NOD vs. NOD.B10 mice (P < 5.9 × 108). Changes in gene expression were no longer associated with this GO term by 4 weeks of age. D: The 34 genes in GO term 5201 that were significantly changed in 10-day-old NOD vs. NOD.B10 islets.

In the context of acute diabetes, Dr. Yips research suggests that structure of the pancreas was affected by inflammation marked by a significant decrease in hepcidin expression, a key regulator of iron homeostasis. The association between GLUT2 and Hepcidin behavior is the key finding that supports Yip’s initial, hypothesis

Overall, Dr Yip’s findings may suggest that iron supplementation should generally be avoided by at-risk children and pregnant mothers.

AdvaitaBio is proud to play a role in the research of young, brilliant investigators like Dr. Linda Yip. Contact us to explore how iPathwayGuide can help your research, too!