A comprehensive review and assessment of pathway analysis methods

Genome Biology recently published a peer-reviewed paper containing a comprehensive benchmarking and comparison of 13 widely-used pathway analysis methods across more than 1,000 analyses. We highlight the most important findings below.

Many high-throughput experiments compare two phenotypes such as disease vs. healthy, with the goal of understanding the underlying biological phenomena characterizing the given phenotype. Because of the importance of this type of analysis, more than 70 pathway analysis methods have been proposed so far. These can be categorized into two main categories: non-topology-based (non-TB) and topology-based (TB). Non-topology based methods, consider the pathways as simple sets of genes.  Enrichment analysis is a very popular approach, used by DAVID and Ingenuity Pathway Analysis (IPA), among others.  Functional class scoring is an alternative non-topology based approach used by Gene Set Enrichment Analysis (GSEA). In contrast, topology-based methods take into consideration the position of the genes, as well as the signals that various genes exchange during the normal functioning of the organism. Intuitively, one would expect that the topology-based methods should be more powerful and provide more accuracy, since they are using much more information than what non-topology-based methods. However, is this actually true?

In a different posting, I discussed some of the difficulties related to the assessment of pathway analysis methods. However, this only a theoretical discussion of how one could compare and assess various methods.  Until now, nobody has ever provided a comprehensive, large-scale assessment of such methods. Anecdotal evidence, ie. results obtained on a couple of  data sets were shown here and in the literature. However, good science cannot be based on results obtained on a couple of data sets. At the end of the day, every single paper presenting a new method will include one or two data sets on which the proposed method is shown to be better than others. So, in spite of the difficulty, we embarked on the uncertain journey aiming to benchmark and compare the main pathway analysis methods currently available.

In a peer-reviewed paper recently published in Genome Biology, we report the results of comparing the actual performance of 13 widely used pathway analysis methods in over 1,085 analyses. These comparisons were performed using 2,601 samples from 75 human disease data sets and 121 samples from 11 knockout mouse data sets. In this assessment, we used both the target pathway method, as well as the knock-out approach (both described here). To choose the best pathway analysis method, one should consider the following four crucial factors in order of importance:

A full discussion of these four factors and how each method performed according to each factor can be found in the full Genome Biology paper. Here, we will only summarize the main results.

If you are interested in the bottom line, the findings can be summarized as follows: 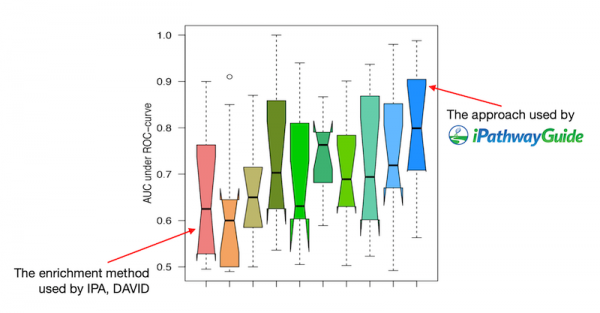 The accuracy, as measured by the area-under-the-curve (AUC), of the receiver operating characteristic (ROC) of several common pathway analysis methods. The accuracy is shown as a box plot with the horizontal line representing the median AUC over all data sets. Image modified from Genome Biology 20, no.1 (2019): 1-15.