How do I know if a pathway is “up-regulated” or “down-regulated”?

We often hear the following question: “Is there any way to know if the whole pathway or the whole GO is upregulated or downregulated?
The results table shows p-values and DE numbers, but I want to know if that pathway went up or down.”

The answer is “No, we do not provide an Up- or Down-regulated call at the pathway level.” This is not a limitation of the software but rather a decision based on sound scientific reasons. The simple answer is that we feel it is a gross oversimplification to call a pathway as “upregulated” or “downregulated”. In most cases, a call of this nature would be incorrect. Here is why:

Let us consider a biological process, let’s say apoptosis. let us consider that there is only one differentially expressed gene associated with this apoptosis in a given experiment. Let’s say that this gene is up-regulated. Can we really say that apoptosis is up-regulated? The answer is no, because it really depends on what the gene does. If the gene triggers apoptosis, the apoptosis as a process will increase (or be up-regulated). However, if the gene inhibits apoptosis, the apoptosis as a process will be reduced (or down-regulated). This is the reason for which there could be no general inference of what happens to a biological process or pathway based on just the number of DE genes included in it. The researcher has to make a judgement in each experiment, based on their knowledge and the specific genes that are up- or down- regulated.

We do not provide a “call” regarding the pathway as a whole because we feel strongly that such reasoning is not the best and can lead to many incorrect conclusions. Other platforms do this because the type of analysis performed by them is limited to enrichment . The enrichment is very limited inasmuch it ignores the positions and roles  of the genes on the pathway, as well as the directions and types of the signals depicted on the pathway. The enrichment does not  calculate any perturbations at the gene levels. Because of this they cannot provide anything but a vague “up” or “down” call for the entire pathway.The impact analysis that iPathwayGuide performs can identify the specific regions of each pathway that are up-regulated or down-regulated, as well as identify the particular chain of events that has happened on each pathway and that can explain all measured changes, taking into consideration all the signals, their direction and type, etc.

Here is an example in which on a given pathway, there is one gene that is up-regulated and one that is down-regulated. The second image of the same pathway shows all signals underlying this pathway. As you can see,  there are parts of the pathway that are up-regulated (shown as yellow-red) and parts that are down-regulated (blue-green). Calling this entire pathway either down-regulated or up-regulated would be a gross over-simplification when in reality a part of it is up and a part of it is down. I know it is tempting to want to think of a pathway as being either up- or down- but the reality is more complex almost every time. Our platform allows the researchers to go beyond the simple up or down and see exactly which parts are up, which parts are down and what the mechanisms are. 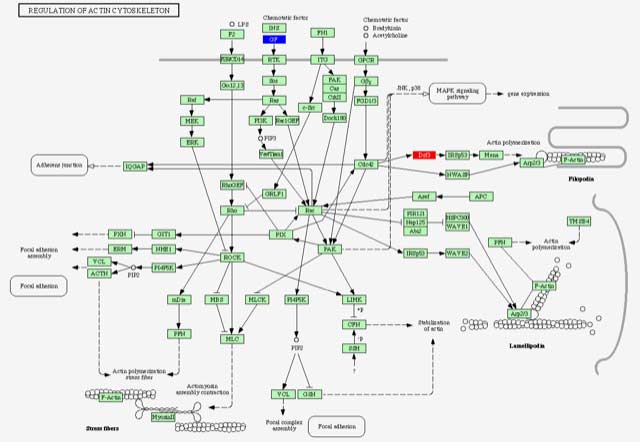 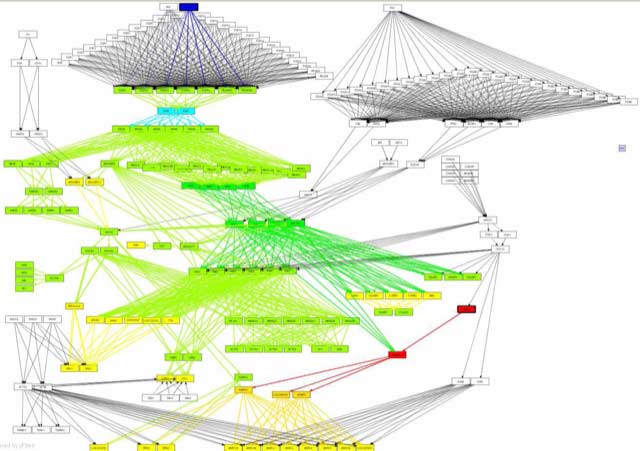