Storytelling is an essential component of Extraordinary Bioinformatics

Whether we like it or not, we, as scientists, are judged based on our communication skills. Tenure committees, academic hiring teams, award panels: they all pour over our papers, scoring us on both the number of papers and their impact. Often, most of the people on these committees will be outside our own areas and will be assessing the impact, not by the scientific advances that we made, but rather through unreliable proxies such as citations, h-index and other statistics. In turn, the number of times a paper is cited or the degree to which the discoveries reported therein are accepted, depends crucially on how well the paper or grant is written.

Over my academic career, I have had the opportunity to listen to several talks given by Nobel prize laureates. After watching a few of these, I started to notice a trend. These people were not  presenting data. They were neither just describing experiments, nor just showing results. They were all telling stories.

The best presenters, the ones that made the audience forget their phones and laptops, the ones who mesmerized the audience, were not even using slides that much! These extraordinary scientists started their presentation, not with some flashy PowerPoint slides, but just by talking. They shared how they became interested in something, and why that was so very important to them, and what they thought would happen, and why that was not quite as they thought it would be, and so on, and so on. Slides were only secondary, for color and support, or maybe to show you some graph from time to time, but only because that graph would be a turning point in their story (or sometimes the evil villain).

How to Improve Your Science Storytelling

Randy Olson, in his book, Houston We Have a Narrative: Why Science Needs Story, argues that storytelling is the secret ingredient. He argues that the work of understanding any communication should be done by the communicator, not the reader or listener.

Olson offers some simple strategies for better communication. In the book, he describes many scientific papers and presentations as piles of facts, a narrative structure he calls, “And And And” or “AAA”.  The book also provides specific strategies to get around the “AAA” or pile-of-stuff narrative style of some presenters and scientific authors. He recommends an “And But Therefore” transformation of the narrative.

You can learn more about AAA and ABT in his 10 mins TED MED talk included below.

Note – the video features some profanity.

As humans, we respond to stories, we remember stories. Using them– truthfully, accurately, and well– will help you as a scientist, achieve your goals.

Good life science research, including bioinformatics, is no exception. An extraordinary bioinformatics analysis will tell you the story behind your experiment. It will give you some facts that match your expectations and setup the framework of you story. But then, it must go beyond that. It should tell you in a coherent, logical sequence what is happening as far as the underlying biological phenomena are concerned. Like a good mystery novel, it should piece together small facts and events and take you to the sometimes unexpected, but ultimately logical, conclusion about what is happening.

Consider the following examples, which start out the same, and diverge from there:

We wanted to better understand [this phenomenon] so we did an experiment.

We wanted to better understand [this phenomenon] so we did an experiment. 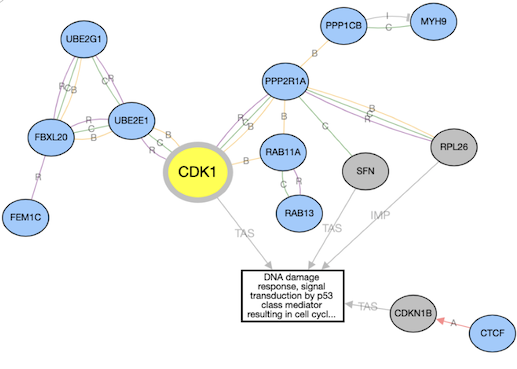 Most platforms will provide results and graphs that just show the data, as the image on the left. . With iPathwayGuide, you can ask specific questions such as: “What is the mechanism through which my differentially expressed genes influence my target biological process”? (as shown in the image on the right) or “What would happen if I treated my phenotype with drug X? Which genes would be affected? What downstream effects should I expect?”

With the right tools to help you make sense of your data, telling a compelling story with a beginning, middle, and end will be almost automatic. Contact us to see it in action.

In the next post in this series, I write about how not to do science storytelling.